INCON is the association of Instrumentation and Control Engineering students aims at developing the technical proficiency and soft skills of students. Also it helps to make them better professionals. And for the inaugural ceremony we are lucky to have Mrs.Sumitha P.K (Alumni 2002-2006 batch ICE ) as our chief guest and speaker on topic “Importance and need of Instrumentation engineer in different sector”. Being the 2002-2006 Alumni of SNMIMT, she spoke about her experience on academic year and working field.
As an introduction she give an appropriate idea on present and future opportunity and requirement of instrumentation and control engineers in different sectors. She gives tips to build or getting a new hype in the career. The session was really interactive to learn and discuss about the trends and future in job sector. She didn’t forget to give us a visual explanation and pictures on her valuable professional life for more information and inspiration on that limited time. She was flexibly able to answer and clear the doubt of students. The session was really helpful and motivational, it gives us an inspiration to build up throughout our career and emerge as fruitful engineers in future. "She gives a hope to everyone who dreams to achieve the goals".
Date : 16-12-2021 Time : 1.30-4.00 Venue : ICE department Seminar Hall

Engineering is amongst the choicest degree courses after 12th Science which has been continuously entangled with innovative technology. Pursuing an engineering degree is quite an arduous task as it combines a diverse range of knowledge into generally a four-year degree. Kudos to having completed “40 subjects with 4,000 experiments attending 40,000 lectures in 4 years.” The feeling of accomplishment is euphoric, but it doesn’t end here. Assuming that there are students out there, who were pressurized into engineering or those who have their every move planned, this point can be important as you have a chance to write the rest of the pages of your professional career. So here to help you is a list of courses after engineering that you must consider. To begin with, there are an innumerable number of career pathways you can take after completing your BTech degree. While MBA vs MTech is quite a relevant debate for Engineering graduates, there are many other conventional courses that you can choose from. Want to know which course to pursue after engineering? Here are the best courses after Engineering: 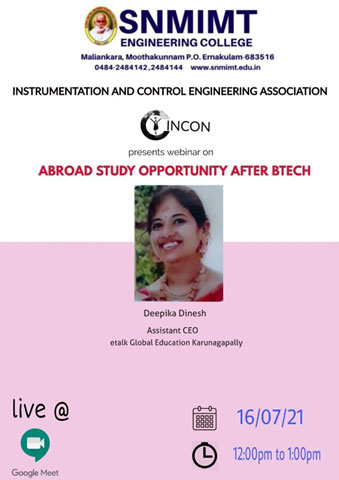 Program: Health is Our Birth Right

When you lift weights, your muscles get stronger and bigger. When you do yoga, your brain cells develop new connections, and changes occur in brain struc­ture as well as function, resulting in improved cog­nitive skills, such as learning and memory. Yoga strengthens parts of the brain that play a key role in memory, attention, awareness, thought, and language. Think of it as weightlifting for the brain.

Studies using MRI scans and other brain imaging technology have shown that people who regularly did yoga had a thicker cerebral cortex (the area of the brain responsible for information processing) and hippocampus (the area of the brain involved in learn­ing and memory) compared with nonpractitioners. These areas of the brain typically shrink as you age, but the older yoga practitioners showed less shrinkage than those who did no yoga. This suggests that yoga may counteract age-related declines in memory and other cognitive skills. 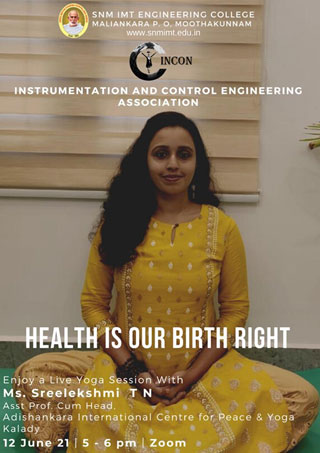 An advanced process control system was designed for production of high density polyethylene (HDPE). Yield controller, product quality controller, slurry concentration controller and cooling system controller had been designed and on trial in a commercial plant. According to reaction mechanism and analysis of huge amount of off-line data, a model was developed to fit quality-control parameters without installation of new on-line instruments. By implementing the software for switching between grades, the switching time shortened and amount of off-grades decreased. The switching operation was optimized. By application of APC software in HDPE plant, fluctuation of product quality was smoothed down, switching time shortened by 30%, and yield of main products increased about 5 %. Stability and safety of operation improved. 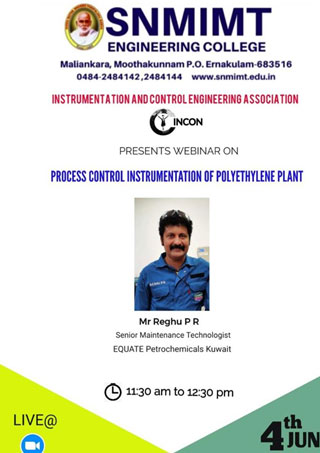 Program: An Introduction to Industrial Automation

The term Automation is coined by an Engineer from Ford Motor Company, who were pioneers in industrial automation and manufacturing assembly line. In the beginning, the industrial production process is based on the eyes, hands and brain of a worker, in contrast to modern day sensors, actuators and computers

But with technological developments in analog and digital control systems, microprocessors and PLCs (Programmable Logic Controllers) and various sensors, it has become very easy to synchronize several independent machines and processes and achieve true industrial automation.

With the rise in industrial economy, the business strategies for industrial automation have also changed over time. 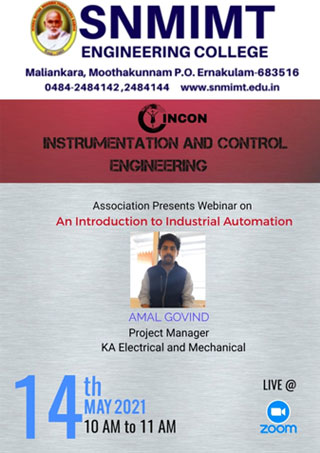 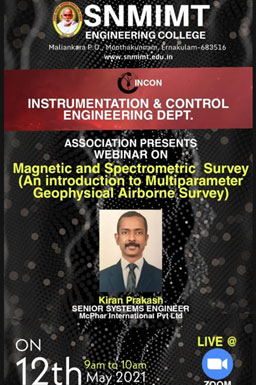 Program: An Introduction to Design Life Cycle of Electrical and Instrumentation Systems 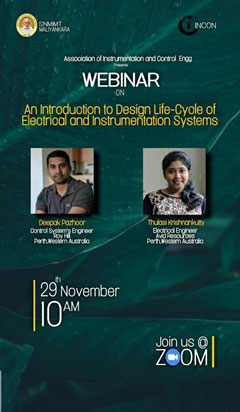 Association of Instrumentation & Control Engg. has organized a technical talk on “Future after instrumentation and Control Engineering” by Mr. Dein Devis on 28/10/2020, Deputy project manager, Tahal group. For regular as well as 16-20 pass out students.

Due to the COVID19 pandemic we conducted this program through online platform ZOOM. Mr. Dein Devis,is one of our prestigious alumni, he interacted and guided the students.

He explained the possibilities and ways to reach at wide range of career possibilities for instrumentation & Control engineers. For example, they might design strain gauges or sensors that capture data about the safety, efficiency, and reliability of machines used in manufacturing. Instrumentation engineers might be employed by manufacturing firms in both abroad and India, defense contractors, biomedical companies, or government entities; or they might work for private engineering firms.. 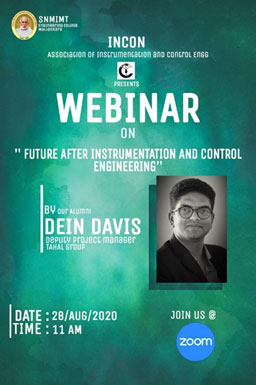 NoviTech in Association with Department of Instrumentation and Control Engineering launches the FREE LIVE Webinar session on Robotics with IoT on 24th July 2020. Live knowledge sharing sessions by industry experts on latest and trending skills and technologies. This One Hour session provided the participants with an insight into the latest industrial standards and applications on the desired domain.

The IoT and robotics communities are coming together to create The Internet of Robotic Things (IoRT). The IoRT is a concept in which intelligent devices can monitor the events happening around them, fuse their sensor data, make use of local and distributed intelligence to decide on courses of action and then behave to manipulate or control objects in the physical world.

The IoT is a network of things that are connected to the internet, including IoT devices and IoT-enabled physical assets ranging from consumer devices to sensor-equipped connected technology. These items are an essential driver for customer-facing innovation, data-driven optimization, new applications, digital transformation, business models and revenue streams across all sectors. IoT devices are usually designed to handle specific tasks, while robots need to react to unexpected conditions. Artificial intelligence and machine learning help these robots deal with unexpected conditions that arise. 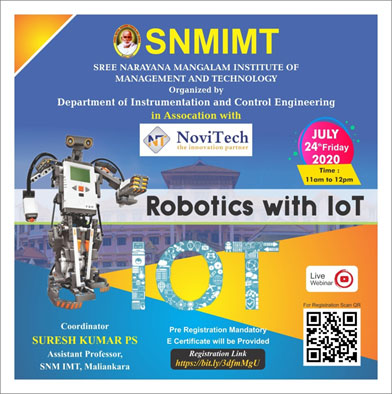 Association of Instrumentation & Control Engg. has organized a technical talk on “Job Opportunities in Instrumentation” by Mr. Gopalakrishnan, of Graphine Automation Pvt. Ltd. For S8 and S6 students.

There is a wide range of career possibilities for instrumentation & Control engineers. For example, they might design strain gauges or sensors that capture data about the safety, efficiency, and reliability of machines used in manufacturing. They also might design devices like blood glucose monitors, aircraft sensors, smoke detectors, or dynamometers that measure torque. They might develop electrocardiograph equipment and computed tomography scanners, or they might work on security systems. In addition, instrumentation engineers have been essential to the success of every aeronautical research project ever flown. Instrumentation engineers might be employed by manufacturing firms, defense contractors, biomedical companies, or government entities; or they might work for private engineering firms.

Workshop on “Calibration of Field Instruments”

Dept. has organized a three day workshop on “Calibration of Field Instruments” for S8 students by Revelation Automation Pvt Ltd .

A motivation talk has organized by the INCON Association on 23 November by Lt Anzari N, Asst Director, Indian Navy based on the topic “LIFE AND CAREER: Day dreaming to Goal Setting”. All the students of ICE department actively participated in the event.

A Group Discussion Club was formed in our department to make the students aware of the latest happenings in and around the world. GD club conducted a program for the 3rdand 1st Semester students on the topic, “Invalidation of 1000Rs and 500Rs notes by the Govt of India”. Students participated and spoke about their views on this topic.

A Quiz competition was also conducted for the 3rd Semester and 1st Semester students. Students participated with great enthusiasm.